This slot is not supported in this slot of device A.

The pin on the backplane or motherboard is damaged. If the incorrect board is installed, the pin is tilted. 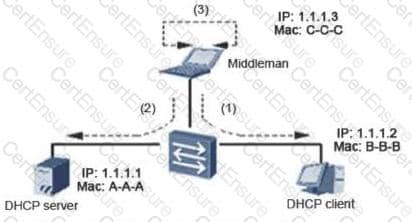 Is the correct statement about TCP proxy and TCP reverse source probing?

The principle of the TCP proxy is that the device acts as a proxy for the TCP connection between the two ends. When one end initiates the connection, it must first complete the TCP 3 handshake with the device.

Use TCP proxy mode for attack defense, you must enable the state detection mechanism.

When attacked, the screenshot of the message captured by a victim host is as follows. According to the analysis, what is the attack? 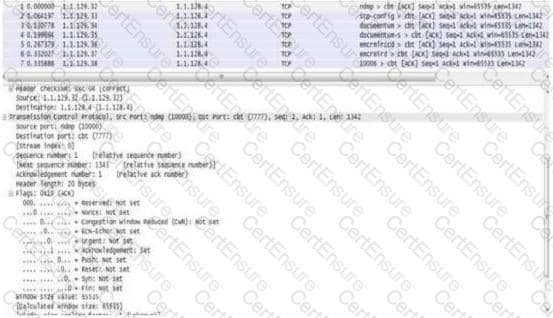 Both AH and ESP protocols of IPSec support NAT traversal

Configure the remote packet capture function on the USG to download the device to the device. You can use the FTP server to analyze the packet.

Which is incorrect about IPSec NAT Traversal?

Both A AH and ESP support NAT traversal

All IKE messages exchanged with the initiator use 4500 port communication

The console port password can be restored to the factory settings by pressing and holding the USG device Reset button for 1-3 seconds.

Defense against the cache server The main method of DNS request flood is to use the DNS source authentication technology:

The firewall interface connected to the DHCP server is configured as untrusted mode.

DHCP relay packets received on the interface in the untrusted mode are discarded.

The DHCP relay packet received in the D trusted mode and passed the DHCP snooping check.

The attacker sends a large number of invite messages to the SIP server, causing the SIP server to refuse service. Which layer of the OSI model is this attack based on?

Note: The SIP protocol is a video conferencing protocol that works at the application layer.

Note: By configuring a static fingerprint, the packets that hit the fingerprint are processed accordingly to defend against attack traffic. First, the TCP/UDP/custom service can extract fingerprints based on the payload (that is, the data segment of the packet); second, the DNS packet extracts the fingerprint for the domain name; and third, the HTTP packet is extracted for the Uniform Resource Identifier (URI). fingerprint.

The dual-system hot standby networking environment is as shown in the following figure: VRRP group 1 and 2 are added to the VGMP management group, USG_A is the master device, and USG_B is the standby device. When the USG_A has a fault Status, such as power failure, the USG_B status is switched from Slave to Master. After the USG_A is faulty, its status is switched back to Master and the USG_B status is still Master. What is the reason for this now? 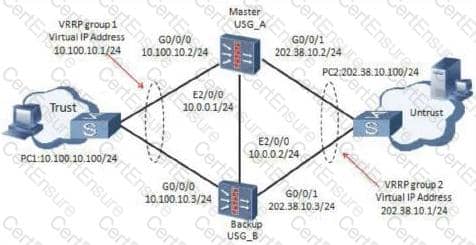 Two firewalls are in load grouping mode. They are configured as master and slave in the same backup group.

After the fault of the USG_A is restored, the priority of the VRRP backup group is not restored in time.

After the USG_A recovers from the fault, the heartbeat line fails.

is not configured hrp track

On the following virtual firewall network, the USG unified security gateway provides leased services to the enterprise. The VPN instance vfw1 is leased to enterprise A. The networking diagram is as follows. The PC C of the enterprise A external network user needs to access the intranet DMZ area server B through NAT. To achieve this requirement, what are the following key configurations? 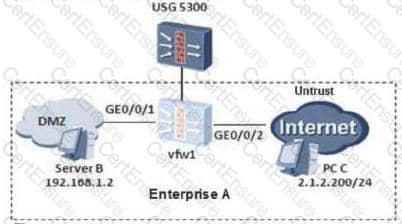 In the TCP/IP protocol, the TCP protocol provides a reliable connection service, which is implemented using a 3-way handshake. First handshake: When establishing a connection, the client sends a SYN packet (SYN=J) to the server and enters the SYN_SENT state, waiting for the server to confirm; the second handshake: the server receives the SYN packet and must send an ACK packet (ACK=1) To confirm the SYN packet of the client, and also send a SYN packet (SYN=K), that is, the SYN-ACK packet, the server enters the SYN_RCVD state; the third handshake: the client receives the SYN-ACK packet of the server. Send the acknowledgement packet ACK (SYN=2 ACK=3) to the server. After the packet is sent, the client and server enter the ESTABUSHED state and complete the handshake. Regarding the three parameters in the 3-way handshake process, which one is correct?

Which of the following objects can the current limiting policy limit?

The administrator can create vfw1 and vfw2 on the root firewall to provide secure multi-instance services for enterprise A and enterprise B, and configure secure forwarding policies between security zones of vfw1 and vfw2.

What actions will be performed when the firewall hot standby sends the active/standby switchover?

Which of the following is correct about the configuration of the firewall interface bound to the VPN instance?

In the client-initial mode, the L2TP dialup fails. From the debug information below, it can be seen that the most likely cause is the dialup failure.

is not enabled l2tp

In the abnormal traffic cleaning solution of Huawei, in the scenario of bypass deployment, dynamic routing and drainage does not require manual intervention. If an abnormality is detected, the management center generates an automatic drainage task. The traffic is sent to the cleaning device.

As shown in the figure, the firewall is dual-system hot standby. In this networking environment, all service interfaces of the firewall work in routing mode, and OSPF is configured on the upper and lower routers. Assume that the convergence time of OSPF is 30s after the fault is rectified. What is the best configuration for HRP preemption management?

Load balancing implements the function of distributing user traffic accessing the same IP address to different servers. What are the main technologies used?

Note: There are three main technologies for implementing load balancing: one is virtual service technology; the other is server health detection; the third is flow-based forwarding.

Accessing the headquarters server through the IPSec VPN from the branch computer. The IPSec tunnel can be established normally, but the service is unreachable. What are the possible reasons?

packet is fragmented, and fragmented packets are discarded on the link.

There is load sharing or dual-machine link, which may be inconsistent with the back and forth path.

DPD detection parameters are inconsistent at both ends

Regarding VRRP messages, what are the following statements correct?

On the USG, you need to delete sslconfig.cfg in the hda1:/ directory. Which of the following commands can complete the operation?

The preemption function of the VGMP management group is enabled by default, and the delay time is 60s.

The A system provides independent system resources for the virtual firewalls VFW1 and VFW2, and does not affect each other.

is transparent to users, and the business between enterprise A and enterprise B is completely isolated, just like using firewalls separately.

Enterprise A and Enterprise B can overlap addresses and use VLANs to separate different VLANs.

Enterprise A and Enterprise B cannot manage their own virtual firewalls independently and must be managed by the administrator of the lessor.

Networking as shown in the figure: PC1--USG--Router--PC2. If PC1 sends a packet to PC2, what are the three modes for the USG to process fragmented packets?